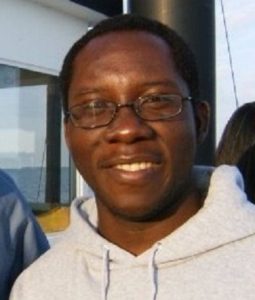 Delaena Kalevor was born and raised in Ghana, West Africa, where soccer is the dominant sport. During elementary school, he played as a winger on their soccer team because he was a fast runner. When Delaena Kalevor started at Presbyterian Boys’ Secondary School, one of the top secondary schools in Ghana, he joined their debate team and competed at a competitive level for his school.

After coming to the US to get his MBA in Finance, he eventually made his way to California via work, where he enjoyed playing soccer with his friends and colleagues. Delaena Kalevor recently moved to Ohio for work with his wife and son, but they hope to return to California soon to back with their friends and family.

How did you get started with soccer? What inspired you?

I’ve been playing soccer since before I could walk. I love it. It’s the most popular sport in Ghana, so it is part of the culture for where I grew up.

It’s a team sport and I love how everybody has a role to play. If you look at the size of a soccer field, it’s a large field, and one person could not dominate the whole field alone. All 11 players have their own role or position and they all need to perform at a high level in order to achieve results.

What is your favorite thing about soccer?

How would you say soccer has influenced your life?

If you take a look at my most recent experience where I was launching new products, I knew I couldn’t launch a new credit card or loan product alone. I needed credit to figure out their acquisition, fraud and account management strategies, I needed IT to build the point of sale interface, I needed legal to draft the correct contract language in a way that protects the bank, I needed customer service to build proper operational processes, etc. A lot of cross-functional parallel effort needed to come together to launch new products on time.

Building all of those pieces required a lot of team effort. Even though we all represented different functional teams, we all needed to have the same goal and march in the same direction. My experience with herding cats in soccer helped me herd cats in the business world to arrive at our desired destination.

Not since I moved to Ohio, but when I was back in California, I would play soccer with a bunch of friends and colleagues. I follow the sport more than I play now.

Just watch it. If you’re curious about it, spend time on learning it and watching the games and championships. If you’re interested in playing, get a group together and play. It’s not hard to play as long as you have good stamina and can run around the field. And it’s good exercise.

If someone wants to play soccer professionally, however, I’d recommend doing a summer in Europe so you can get noticed by scouts. Perhaps try joining a summer camp there, maybe in England or Spain, since Europe and South America are the two main powerhouses of soccer. It’s not a very popular sport in North America.

I spend most of my free time with my family because I’m a big family man. But I am a huge history buff and I like to have intellectual debates about history and politics with friends. I also like reading about warfare, strategy, business, and economics.